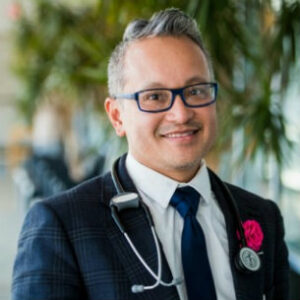 Don S. Dizon, MD, FACP, FASCO is the Head of Women’s Cancers at Lifespan Cancer Institute, Director of Medical Oncology at Rhode Island Hospital, and Associate Professor of Medicine at The Warren Alpert Medical School of Brown University in Providence, RI (USA). He was trained in medical oncology at Memorial Sloan-Kettering Cancer Center (MSKCC) where he was also on the faculty in the Developmental Therapeutics section and Gynecologic Oncology Disease Management Team at MSKCC until 2003. Between 2003 and 2009 he was the director of medical oncology at the Program in Women’s Oncology at Women & Infants Hospital of Rhode Island where he also founded the Center for Sexuality, Intimacy, and Fertility for women with cancer (CSIF)- the first program of its kind in Rhode Island. In July 2012, he transferred his clinical practice to MGH, where he founded and directed the Oncology Sexual Health Clinic at the MGH Cancer Center. Between 2014 and 2017 he was the Clinical Co-Director of Gynecologic Oncology at the MGH Cancer Center. In addition to his clinical duties, he is a co-chair of the Cervical Cancer Task Force for the NCI Gynecologic Cancer Steering Committee, section editor in Gynecologic Oncology at UpToDate, and serves on multiple editorial boards, including for The Oncologist, the Journal of Clinical Oncology, and the American Journal of Clinical Oncology. He is also prolific on social media and maintains online columns at Connecton and for the journal, The Oncologist.  He chairs the Digital Engagement Committee for SWOG, a member of the NCI National Clinical Trials Network. In 2018, he was named a Fellow of the American Society of Clinical Oncology.