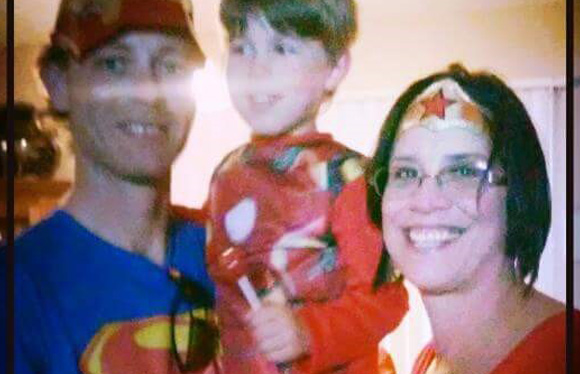 My name is Rebecca Adam. I’m 39. I’m a stay at home mom of a special needs 4 year old son, a wife to the love of my life and also battling DeNovo Stage IV metastatic breast cancer.

My rollercoaster stared in March 2013.  After weaning my 15-month old, I started noticing breast changes (one bigger than the other, dimpling, nipple inversion and pain in my chest that went through my back.) I was also extremely exhausted. I thought these were all “typical new Mom, lactating or drying up” symptoms. I went in for my annual doctor appointment that ended with “this is suspicious” see you Monday for more “testing” result.
After a series of several tests, biopsies, scans, etc., I was diagnosed Stage IVb breast cancer with metastases all over my liver and lung on June 18, 2013. At this time I was told I had an “undetermined life expectancy”. This was all just the day before my sons 18 month “well baby check” that had ended up with an “autistic” diagnosis of his own. We actually started treatment within weeks of each other. Him in home services and me chemotherapy.

I took 16 rounds of infused chemotherapy and was put into menopause. I was to have a radical double mastectomy followed with radiation. However I was told just before my son’s 2nd birthday and Christmas that they wanted to hold off on the operation and radiation. I was elated! On March 28, 2014 I was put into a “radical remission” and currently all scans show stable metastatic disease on my liver. I look for, and show inspiration, hope, love and grace whenever I can.