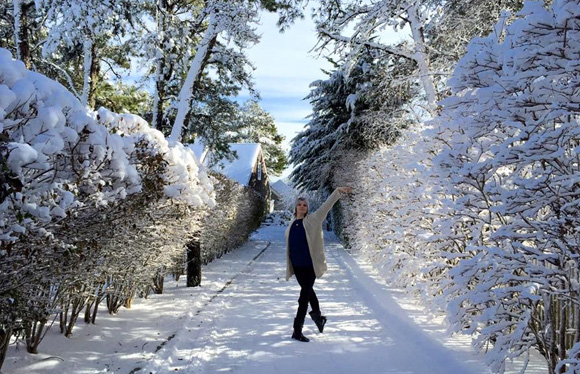 Maggie Kudirka began dancing at age four and later studied the Vaganova syllabus with Olga Tozyiakova, Svetlana Kravtsova, and Vadim Pijicov in her hometown of Ellicott City, Maryland.  She graduated magna cum laude from Towson University where she performed principal roles in Swan Lake, Giselle, and Paquita. She danced professionally with Ballet ADI under the direction of Runqiao Du dancing principal classical roles in addition to creating numerous contemporary roles. Her many awards include the $5,000 Rising Star Award for Emerging Performing Artists, a silver medal from the Youth America Grand Prix (YAGP) Philadelphia Competition, finalist at YAGP New York nationals, and full merit scholarships to the Joffrey summer intensive and ballet trainee programs.  In 2013, she joined the Joffrey Concert Group where she worked with Francesca Corkle and danced featured roles in works by Gerald Arpino, Donald Byrd, Larry Keigwin, Shawn Hounsell, Africa Guzman, and Davis Robertson.

After receiving a stage 4 breast cancer diagnosis in June 2014, Maggie took a leave of absence from the Joffrey Concert Group to undergo treatment.  On June 24, 2014, she launched the Bald Ballerina Facebook page to share her cancer journey with family and friends and to raise awareness that breast cancer can also strike fit young women with a healthy lifestyle. Bald Ballerina has since grown into a social media movement with over 6,900 followers from over 40 different countries throughout the world.  Her story has appeared in TODAY.com, the Daily Mail.com, Vogue.com, Dance Spirit Magazine and many others. A feature story created by     WBAL-TV in Baltimore was broadcast by NBC affiliates across the USA.  She currently is an advocate for Living Beyond Breast Cancer, METAvivor, and the Dancers Care Foundation. She travels throughout the United States giving master ballet classes and speaking to young dancers about metastatic breast cancer.