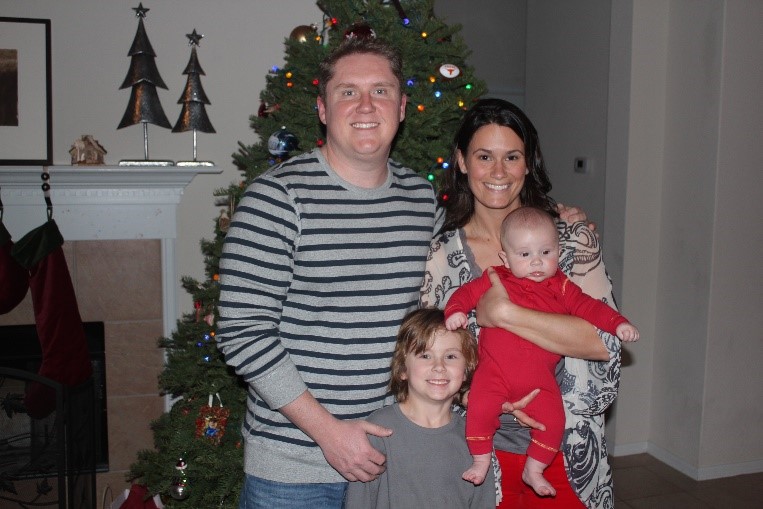 September 11, 2008 I found THE lump under my left armpit. Terrified, and with a gut feeling that it wasn’t good, I called my OB-GYN. She immediately got me an appointment for a mammogram and breast ultrasound. Nothing showed up on either, except four large lymph nodes. After a lymph node biopsy, it was confirmed I had breast cancer; and after my MRI, it was confirmed that I had three tumors in my left breast. I was 31, extremely healthy, with no family history of breast cancer, married for three years – we had just moved to Chicago with our then almost two year old son.

I underwent A/C chemo, bilateral mastectomy, reconstruction, blood transfusions, Taxol, radiation to my chest wall, Herceptin and Tamoxifen. June of 2009 we moved to Austin. I completed my Herceptin there, continued Tamoxifen, and had clear scans in April 2010.  In November of 2010, I ran my first half  marathon.  In August of 2011, I ran my second half marathon. In August of 2011, I went off Tamoxifen for six months to try and conceive.  On September 14, 2012, he was born.  I got back on Tamoxifen six weeks after his birth and began running, taking tennis lessons, and kick-boxing classes. I felt the best I had ever felt. I was healthy, I had my two sons, and life was great.

September 7, 2014, I was working a shift in the Neonatal ICU. I didn’t feel right. The Neo and labor and delivery charge nurse checked my blood pressure and blood sugar. Both were normal. Later that afternoon, I still felt really bad. I went to the door to get out of the locked unit, and I couldn’t remember how to open the door. I knew it was a door, but couldn’t remember how to open it. When I finally got out, the L&D charge nurse saw me, ran to get a wheelchair, and brought me down to the ED. My right leg was convulsing and I was in so much pain. By the time they got me to the back (minutes later) I had a tonic-clonic seizure. The MRI revealed a 2.5-3cm tumor between the two hemispheres of my brain.

Metastatic breast cancer was confirmed after my crainiotomy on September 11, 2013. Late September, it was confirmed that I had mets to my right lung, one in my spine as well. I underwent brain radiation, a bilateral Salpingo-oopherectomy, and chemotherapy. I had to go to physical therapy to work on my proprioception and build strength back up on my right side. I continue with Herceptin, Perjeta, and Anastrozole to this day. I am currently NED (no evidence of disease). My lung, spine, and brain mets are not active. I am now dedicating a lot of my free time to advocating for metastatic breast cancer research and patient support.