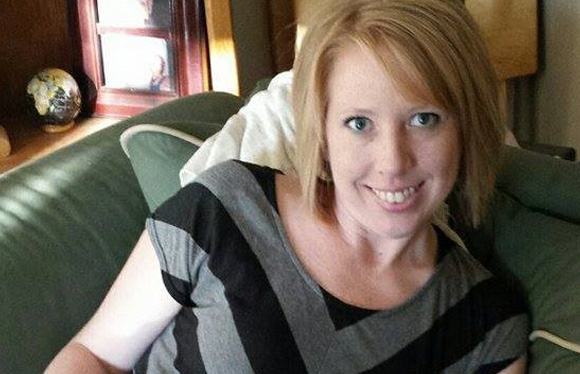 In the spring of 2011, I started having random shoots of pain in my left breast. Everyone gets unexplainable aches and pains, but I had a feeling I shouldn’t ignore this. Needing some additional urging, I asked a friend in nursing school if she thought it was worth checking out and she encouraged me to see a doctor. While the doctor said she didn’t feel anything suspicious, since I was having pain, she referred me to the Breast Care Center. There, I had my first mammogram (which would actually end up also being my last), followed by an ultrasound. Then they told me they wanted to do a biopsy. By Tuesday I was diagnosed with breast cancer. I was 31.

Because I was so young at diagnosis (less than 5% of women diagnosed are under 40), I was asked if I wanted to do genetic testing to see if I was positive for one of the BRCA genetic mutations. Although I was the first one in my family to have breast or ovarian cancer, I decided to go ahead with the test, which came back positive for BRCA 2. Since they now knew our family has the mutation, my parents, brother, and sister all got tested. All but my mother are positive for the mutation. We went from no family history to a family with very high risk of breast and ovarian cancer.

I had initially thought I would do a lumpectomy to remove the tumor, followed by radiation. But after my BRCA diagnosis and a new awareness of the associated much higher risk of recurrence, I decided to have a preventative double mastectomy. After surgery, the doctor staged my cancer as 2a (no lymph node involvement). While I had been sure that I wouldn’t need to have chemotherapy, my oncologist told me that without chemo, and with my BRCA mutation, my risk of recurrence was 50%! So I did the chemo, supposedly dropping my risk of recurrence to 15%.

When I was first diagnosed, I had just started dating someone and we were in  a long-distance relationship. I joked that I had gotten cancer just so that he would have to be the one to make the seven-hour drive each time we wanted to see each other. It was awkward to be making life-changing decisions about my body and fertility not knowing if this guy would be a part of my future and therefore affected by my decisions. I opted not to harvest eggs before beginning chemo. There was no guarantee that I would lose my fertility by going through chemo, but there was a significant risk that the hormones I’d have to take could aggravate my cancer.

Despite the fact that I was now missing important parts of my anatomy and had no hair for most of the time we were dating, this guy stuck around. Almost a year after my diagnosis, he proposed! So many women worry about how to fix their hair for their wedding day; I was just thankful to have any hair at all. It was the start of a new life; cancer was behind us now, except for the frequent check-ins where the doctors would tell me everything looked fine.

I still carried the BRCA genetic mutation, though, which meant, besides being monitored for a recurrence of my breast cancer, I was also being seen at a high risk clinic every six months for tests and exams looking for ovarian cancer. After three years of monitoring, in December 2014, my tumor markers started to rise. I had always known my ovaries would need to be removed, but that was supposed to be at age 40, not 35. We began monitoring monthly and my doctor hinted that if my husband and I wanted to try to have biological children, we should probably go ahead with it so we could then remove my ovaries.

Fertility tests showed that it was extremely unlikely that I’d be able to conceive, even with fertility treatments that would again increase my risk of recurrence, so we decided to go ahead and remove my ovaries. Around this same time, I began having back pain. I have a desk job, so I thought it was probably caused by that, but it was unlike any back pain I had experienced previously. I felt silly worrying that this pain might be related to cancer, but I mentioned it to my oncologist anyway. Instead of brushing it off, like I thought he’d do, he scheduled bone and CT scans. Within hours of my first scan, my doctor was on the phone, telling me that what he saw had him concerned. After the second scan, his fears were confirmed – my cancer was back and had moved to my spine.

Metastatic breast cancer doesn’t have a cure. You cycle through treatment after treatment until none of them work anymore. You “fight,” not to beat it, but to extend your life another day, another year, in the hopes that a cure will eventually be found. Though this seems so discouraging, I do not live as one who has no hope. This world may take my body, but it cannot take my soul – that belongs to God alone. And whether here or there in heaven, I WILL live.