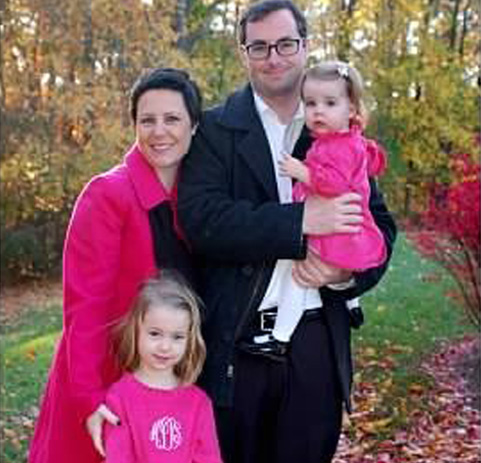 My name is Colleen Duffey.  I am a wife and mother, who was diagnosed with Stage IV Breast cancer at the age of 32, in December 2012. I have a beautiful family that includes my husband Cliff and two daughters Mary and Kate. My daughters were four years old and four months old at the time of my diagnosis.

I graduated from Georgia Tech with a degree in Mechanical Engineering in 2004.  After graduation I had a successful career working for Lockheed Martin as a Systems engineer.  Prior to Kate’s birth we had moved into a single family house.  Everything was falling into place.  Cancer was the last thing on my mind.

I returned to work in November 2012 and started feeling ill around Thanksgiving.  I attributed the fatigue & illness to being a new mother & the stress of returning to work. I made an appointment with the Doctor who examined my breast but diagnosed me with mastitis.  While my illness continued we got to a point where a blood test was completed & the liver function results were high.  A CT scan of my liver was ordered and they discovered numerous nodules in my liver.  A biopsy of the nodules was performed at that point. The Doctor would not give me the results on the phone so I was called to the office on December 21, 2012. The Doctor gave us the news that I had metastatic cancer in my liver, which had spread from somewhere else. That weekend I became more symptomatic & was hospitalized.  The Oncologist in the hospital said breast cancer was very unlikely.  They believed it was either colon, ovarian, or pancreatic, which is what they tested for. Finally, after 7 days of tests (they added tests for esophagus, thyroid, lung and others) to find the primary source a mammogram was performed just in case.  That day a Stage IV Breast Cancer diagnosis was made.  I was shocked and confused.  I was young and I had no history of cancer in my family.
I started chemotherapy immediately.  I completed 6 cycles every 21 days of Herceptin, Taxotere, & Perjeta in April 2013.  I dropped the Taxotere and continued on the Herceptin and Perjeta until April of 2015 when I switched to Kadcyla.  In addition to the chemotherapy I have had added Zometa, undergone a mastectomy, and completed radiation to the chest, skin, supraclavicular, and to my whole brain.  These changes to my treatment were all made when the cancer progressed.  The cancer outsmarts the chemotherapy and grows.  The cancer has spread from my breast to my liver, bone, skin, lymph nodes, and my brain.  I am optimistic use these life changing events to better myself, my family, & others.  I teach my little girls the meaning of being a strong woman and standing up for yourself and others.  I advocate for more targeted drugs with fewer side effects.  I testified at the Food and Drug Administration (FDA) hearing for the approval of Perjeta for early stage breast cancer patients.  I met with the pharmaceutical company that makes the drugs I am on, Genentech, as a patient advisory board member.  I presented my opinion at the FDA 2015 patient perspective hearing. Additionally, I share my story as much as I can with employees at pharmaceutical companies so they see what a difference they have made in my life by creating these new and innovative drugs   I would also like to point out how valuable support is.  Saying I want to have a positive attitude is one thing. But being supported by so many ensures my attitude is positive. If I can succeed in leaving Kate and Mary with two lessons: