I guess you could say that I had to become a cancer patient to learn that scanxiety exists. My body is prone to developing large cysts and weird skin lesions so I got use to all of the extra screening I had to do. Over the years, I had multiple ultrasounds, CT scans, and several moles removed followed by biopsy. Every time the results came back the same: benign.

Two months before I was diagnosed with breast cancer I went for my routine annual check-up.  While examining my neck, my primary doctor felt “something” and sent me for a neck and thyroid ultrasound. I was like, “Sure, why not?” A few days later, my doctor called me to share the results that there were nodules on my thyroid and a biopsy was recommended with an endocrinologist. Once again an ultrasound guided biopsy was performed and about one week later the results came back: benign, please follow up every 6 months.

Two months later, I felt a lump in my breast and was sent for my first mammogram.  Again I thought this would not be a big deal and that I would be told “it’s a just a cyst.”  This time, it turned out to be breast cancer.

All I can say is that from that day forward, my “routine” scans, tests and biopsies scared me.

I no longer go to doctor visits and screening appointments thinking,“ Oh, it’s nothing. It’s just another benign cyst”.  I experience anxiety with each appointment and every screening. This is scanxiety. And this is my “new normal”. I’ve come to realize that after all the tests and appointments I’ve been through both before surgery and after, that I am allowed to be scared.  I am afraid to let my guard down. I’ve learned that scanxiety exists. Scanxiety is real and I am not afraid to say it aloud. 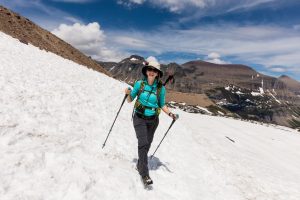 When they take your “security blanket“ away Stay Persistent