Until Our Friends Stop Dying 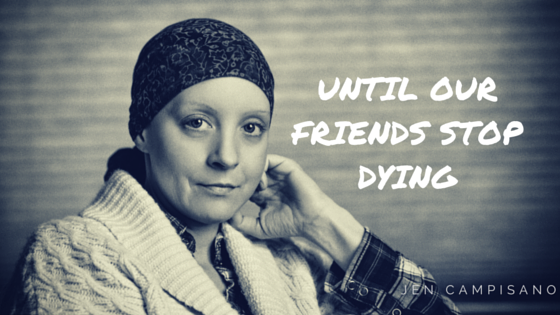 I’d like to say last week was an unprecedented week of losses in the metastatic breast cancer community, but I’d be lying. We have been rolled by these waves before. And god knows we will continue to see our friends die until science catches up with cancer, that wily beast.
Science is not there yet. Cancer is not yet a chronic condition like diabetes or heart disease or even HIV. Friends whose disease looked just like mine on paper didn’t respond at all to the same drugs that seem to be keeping cancer at bay for me. When I asked one researcher why that is, she said, “We’re still trying to figure that out.”
I am one of the lucky few, for now. I am an outlier. I have had no evidence of cancer for more than 2.5 years, since six months after I started a targeted antibody-drug conjugate that goes after cancer but leaves the rest of me relatively unscathed. I am so grateful to science for that. I still don’t have any eyebrows or energy most days, and my chemobrain lingers years after Taxotere and Carboplatin. But I am not dying of cancer at this moment.
I have been to friends’ funerals, taken lasagna to a grieving widower and his preschool-aged children, had what I’ve known will be the last conversation with a friend (but held it together until we hung up and then cried my eyes out), and I’ve hugged a powerful force of a woman only to have her be gone the next season. I know firsthand how short life can be. There are dozens of holes in my heart.
I fill these holes by throwing myself into life with my little family, by writing, by advocating and participating in the greater metastatic community, by adopting a puppy when what I really want (but can’t have and don’t have the energy for because of cancer treatments) is another baby. Then I get short-circuited because of exhaustion and grief, and snap at the dog for not getting back inside fast enough after I’ve let her out to pee. It is 90 degrees out at 7pm, the mosquitos are active, and I’m tired of standing at the door, waiting.
I have more anxiety than I know what to do with. I am angry. It is not the dog’s fault.
I feel guilty for being alive, for making it. Have I made it? I will know when I die of something else. I try to channel this strange mix of guilt and gratitude into action. Can one voice make a difference? Can mine?

I try to live in the present and not take for granted that I get to parent a frequently cranky almost-kindergartner. I get to plan meals and subscribe to magazines without too much fear that I won’t be around for the entire twelve month period. I get to think about summer vacations and attend my 20-year high school reunion this year. (I still cannot find it in me to appreciate getting to do laundry.)
It is an odd place to be, having been diagnosed with a disease that typically kills in less than three years and then faring remarkably well. I am always waiting for the other shoe to drop, not sure when my luck might run out. At the same time, I wake up in awe of the fact that I am still alive nearly five years after my diagnosis. As Mary Elizabeth Williams put it in her memoir on surviving metastatic melanoma, A Series of Catastrophes & Miracles, “This is the cruel reality of successful cancer treatment. You want so much for everybody to get what you got, and for it to work like it did on you, but that’s not how it happens. Instead, getting better often feels as random as getting sick was.”

I want this “getting better” kind of outcome for everyone.
Instead, my chest aches for the 41,000 men and women who will die of breast cancer this year in the U.S. alone. How do we begin to quantify this number in ways that will express our urgency? 112 every day. Approximately 194,750 since my diagnosis.

I am furious about my friends who’ve died too young. I am scared, too, for all of us diagnosed with late-stage cancer. In the back of my mind looms the shadow of this beast, and the burden we all carry because of it, until the science catches up, until our friends stop dying.