My Diagnosis & Discovering my Jenfluence 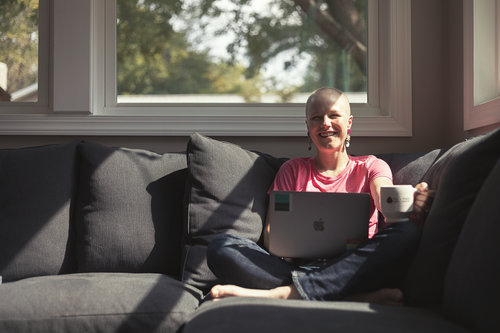 Before March of 2018, I led a seemingly vanilla life in Raleigh, North Carolina – the same city where I was born.

I’m 34 and married my high-school sweetheart. We have two daughters, Elin, four, and Halle, one.

However, on Sunday, March 25, 2018, after a hot yoga class, I noticed discoloration on my left breast. It was a blueish purple and slightly raised – kind of like it was a scar that was healing.

But, I had no reason to have a scar.

After noticing the discoloration, I did a breast self-examination and immediately felt the mass. It was dense and distinct. I did not have the same mass or discoloration on my right breast.

I saw my OB/GYN the very next day. By Tuesday, I was sent to see a breast specialist.

On Wednesday, I was diagnosed with invasive ductal carcinoma, HER2+. The tumor was 6cm, and one lymph node tested positive.

Days later on April 10th, my daughter’s first birthday, I had my port placed.

After completing chemo and my bilateral double mastectomy, I learned that I had a complete response to the chemo – both my tissue and lymph nodes were clear of cancer at the time of the surgery.

Immediately following the completion of my chemo, I started six weeks of radiation.

Genetic testing confirmed my cancer was not handed down from a prior generation, which gives me some hope that, perhaps, cancer will not find my girls.

I’m an attorney by trade, but currently taking time off to focus on healing.

Looking back before my diagnosis, I worked out nearly every day and ate in moderation. My physical in January 2018 showed no signs of what would come later in the year – I was considered in “good health.”

Now, it’s time to get back to that good health.

I’ve blogged about my journey on my website: www.jenhoverstad.com.

I created the term “Jenfluence” to remind myself that by sharing my story, I can have an effect on the character and behavior of others.

Whether it’s interacting with people in person or writing a post on Instagram, I’ve become hyper-intentional in hopes that my positivity and perseverance will transfer to others.