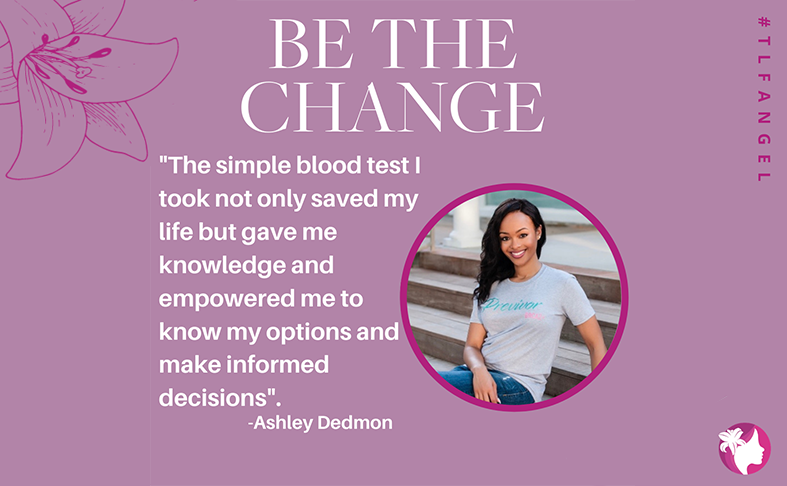 In 2003, my mother was diagnosed with Stage IV metastatic breast cancer and unfortunately lost her four-year battle at the young age of 52. Shortly after my mother’s battle with cancer, my father was diagnosed with prostate cancer at age 53. He elected to have his prostate removed and is currently doing well. I knew that the odds were against me as I was born into three generations of women affected by breast cancer. After experiencing my mother’s battle and witnessing my father deal with prostate cancer, I naturally believed I was next. I was scared. I had questions, and I needed answers.

It was then that I took immediate action. I reached out to my OB/GYN, updated her on my family history, and she suggested genetic counseling and screening for the BRCA genetic mutation. At the age of 22, my Myriad BRCA Analysis revealed that I was BRCA2 positive, a leading marker for the disease. Having this genetic mutation increased my risk of breast cancer to 87%, compared to the average woman who is at a 12-13 % risk over her lifetime. It increased my risk of ovarian cancer to 63% and elevated my risk for other cancers. I am unsure whether I received the BRCA2 gene mutation from my mother or father. Although, there are multiple breast cancer cases on my mother’s side, I could have inherited the gene mutation from my father since he had prostate cancer, which is an indicator of a BRCA gene mutation. The simple blood test I took not only saved my life but gave me knowledge and empowered me to know my options and make informed decisions.

I was referred to a high-risk oncologist at the age of 22, but my pride got the best of me and I refused to see her. I walked out of her office before I had the opportunity to meet with her. “This is not for me. They have the wrong person,” I muttered to the receptionist as I walked out. I did not want to face or accept my reality. Being in the office reminded me of the many days my father and I spent with my mother in her oncologist’s office for chemotherapy. A cold, empty white space where I saw my mother fight day in and day out.

I finally went back to the oncologist knowing that I had a responsibility to take care of my health. I was stubborn, scared, and didn’t want to face the reality just after losing my mother, but I knew this test would give me the answers. I knew it would help me to navigate my health going forward. I had a responsibility. At my second visit to the oncologist, she gave me the humbling experience I needed. Her words changed my life forever, and I accepted my BRCA2 positive diagnosis as a gift of knowledge and not a death sentence. She said, “Ashley, you have options. Your mother, she didn’t have options. My other patients, they don’t have options. So, let’s explore those options.”

After we discussed my various options, hormone therapy (which would drastically reduce my risk by 50%); surveillance (which would aggressively monitor my breast and ovarian health); and prophylactic options (which would reduce my risk down to a below 1%-2% residual risk); we decided that for my age and current life circumstances, that ongoing surveillance was the best option for me, and prophylactic options could be visited at a later time.

I spent ten years undergoing breast MRI’s, ultrasounds, mammograms, and transvaginal. Early on, I encountered medical personnel who said, “You are too young for these preventive services,” and advised me to “Come back at the age of 40.” I realized that those individuals were not educated on my mutation or risk, and they were not used to seeing women in their 20’s being screened for a disease that usually develops in older women. We are no longer in those times. This disease can impact anyone as early as 20 (and younger). Waiting was out of the question for me. Being high-risk, I wanted to be proactive and not reactive.

Over the next ten years, God blessed me with a husband and a beautiful daughter. I went from just thinking about me to thinking about us. I was physically exhausted and mentally drained from the on-going screenings, and I still felt scared every time the phone rang, or I was called in to hear my results. I could not keep living like this and I had to make a tough call. Besides, I knew what it was like not having a mother, and I refused to allow history to repeat itself. I had a family to consider. What would my legacy say about me? Although cancer took my past, I would not let it take my future. I had a legacy to protect.

After knowing my options as a healthy undiagnosed woman, I began to think about a prophylactic procedure. An oophorectomy was not an option since my husband and I wanted to have more children. I had the honor and privilege to breastfeed our first baby, and it was a joy and bond like no other. I knew that having a baby and breastfeeding was not only a good thing for my daughter, but a good thing for my breast health, but it wasn’t enough. I breastfed my baby for four months and had some milk stored up to provide her for 5 ½ months. During my first year as a mother, I began to pray and have conversations with my husband about my breast health. My screenings had temporarily been put on hold since I was pregnant and breastfeeding, but I knew it was time to pick up where I left off. I did not have time for all these appointments anymore, but that was not an excuse. The accountability was on me. I had seen my mother forget about her health, and I saw where that led her. So, that was not an option. I needed a new plan for my new normal. I had to pivot.

When my daughter was 2, I decided to have a prophylactic bilateral mastectomy. Although the potential onset of disease was not supposed to occur until 40, this was the right time. I was between children, and I was young enough to bounce back. In December 2016, I underwent a bilateral prophylactic mastectomy and reconstruction the following March. This preventative procedure reduced my risk of developing breast cancer from 87% to a below 1 to 2% residual risk, and I would continue my annual transvaginal and CA-125 screenings to aggressively monitor my ovarian health.