A Patients Guide to Health Equity, Partnership and Collaboration

Of the more than 200 different types of cancers, breast cancer remains the most common. It is important to note that breast cancer does not affect all men and women the same. Even living in North America, unfortunately still impacts their access to care. As researchers work to address disparities it remains critical to look at communities at the grassroots level. Tigerlily Foundation and American Association for Cancer Research (AACR) hosted a special session at the 2020 San Antonio Breast Cancer Symposium that addressed the importance of health, collaboration and partnership with Black, Indigenous and people of color (BIPOC). The numerous research studies shared during our special sessions suggest that the primary reasons for breast cancer-related health disparities are rooted in large part by socio-economic differences. However, even the most educated and economically advantaged Black, Indigenous and persons of color (BIPOC) have a higher prognosis of cancer compared to White women. Tigerlily Foundation is committed to working with medical researchers and professionals to address racial and socio-economic disparities in breast cancer care. Sharing these findings with you, as an advocate and ally, is part of our mission to end disparities – of age, stage and color, in our lifetime.

Where You Live Impacts Your Cancer Survival

The University of Miami and Florida International University are the first to use a new measure, the Index of Concentration at the Extremes (ICE), to analyze the effects of economics and the neighborhood you live in (racial/ethnic residential segregation) on breast cancer survival in South Florida. The study looked at 6,145 breast cancer patients from South Florida. 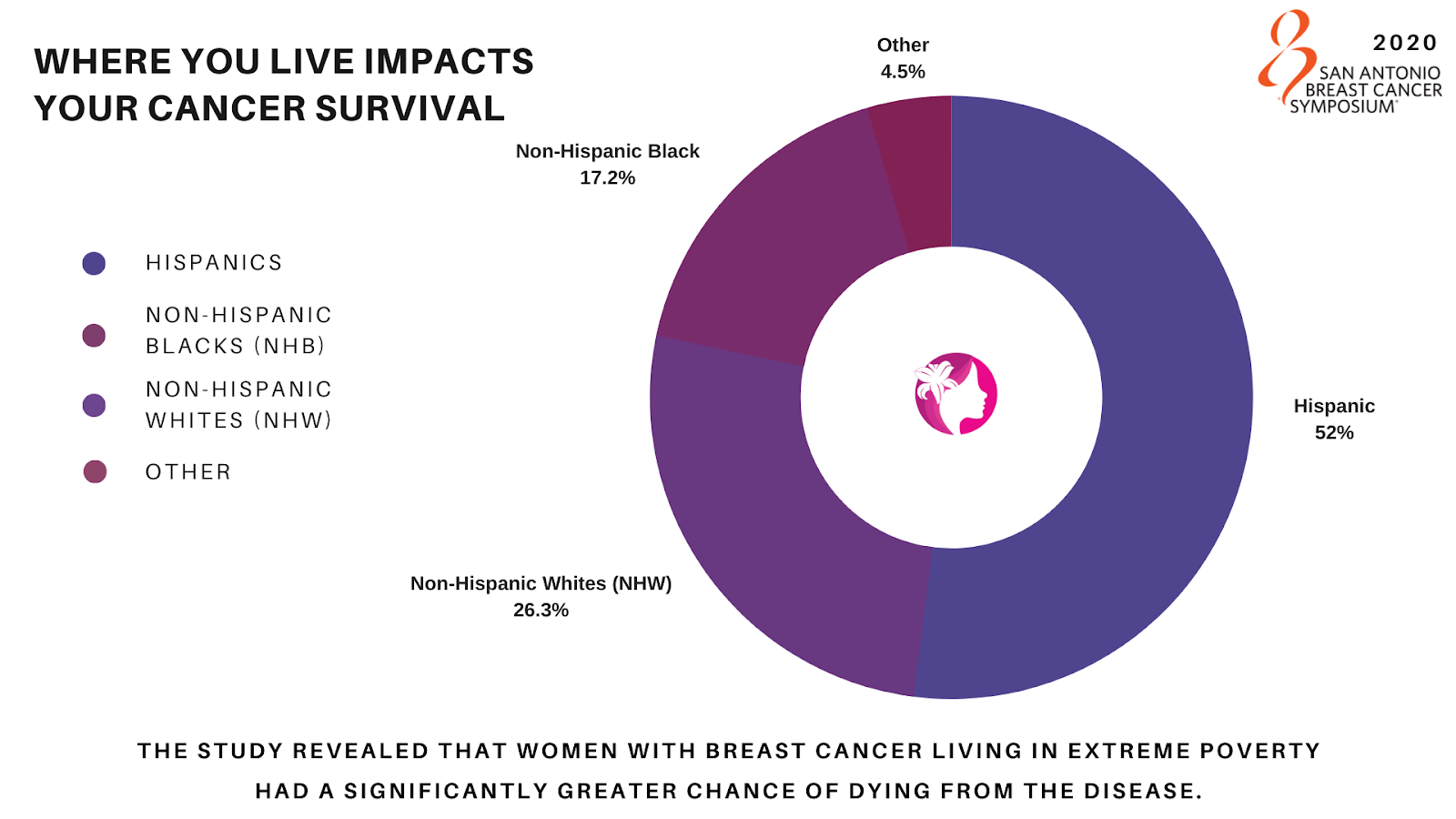 With over 52% Hispanic, 26.3% Non-Hispanic Whites (NHW), and 17.2% Non-Hispanic Blacks (NHB) represented, the study revealed that women with breast cancer living in extreme poverty had a significantly greater chance of dying from the disease.

In conclusion, The University of Miami and Florida International University found that breast cancer survival disparities are partly influenced by extreme racial/ethnic residential and economic segregation. When accounting for socio-demographics, tumor characteristics, the guideline for appropriate treatment from the National Comprehensive Cancer Network (NCCN), disparities remained. This suggests potential social and environmental factors that impact survival. Further supporting the need for effective interventions that account for the social and environmental contexts in which cancer patients live and are treated.

In another study by Johns Hopkins University in Baltimore, Maryland they assessed 140,346 women between 2013-2020. Researchers tracked breast cancer screening methods, focusing on racial differences in utilization and effectiveness.  The use of Digital Breast Tomosynthesis (DBT), a more effective screening technique compared to traditional two-dimensional digital mammography (FFDM), rapidly increased over the study period, however, Black and Asian women were less likely to have had a screening with DBT compared to White women. 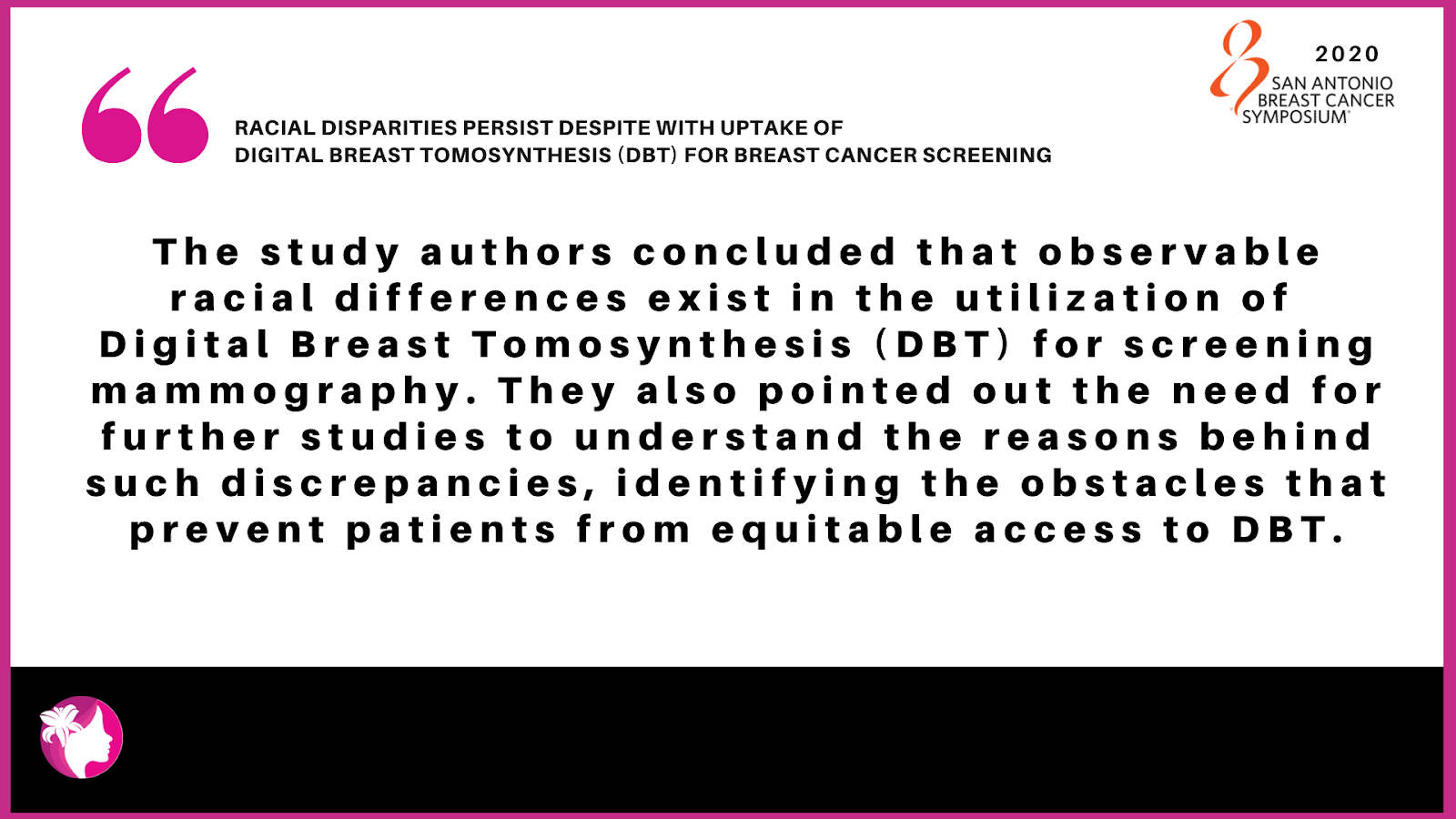 Here is a study from the National Surgical Quality Improvement Program (NSQIP) looking at 180,700 women who underwent Breast Conservation Surgery (BCS). They identified through the database between 2008-2018, racial differences in BCS utilization rates (partial mastectomy and oncoplastic/reconstructive surgery) that were examined to determine how the rates changed over the period of time. Of the 46% of women who underwent BCS, 92% underwent a partial mastectomy and 8% received oncoplastic procedures. 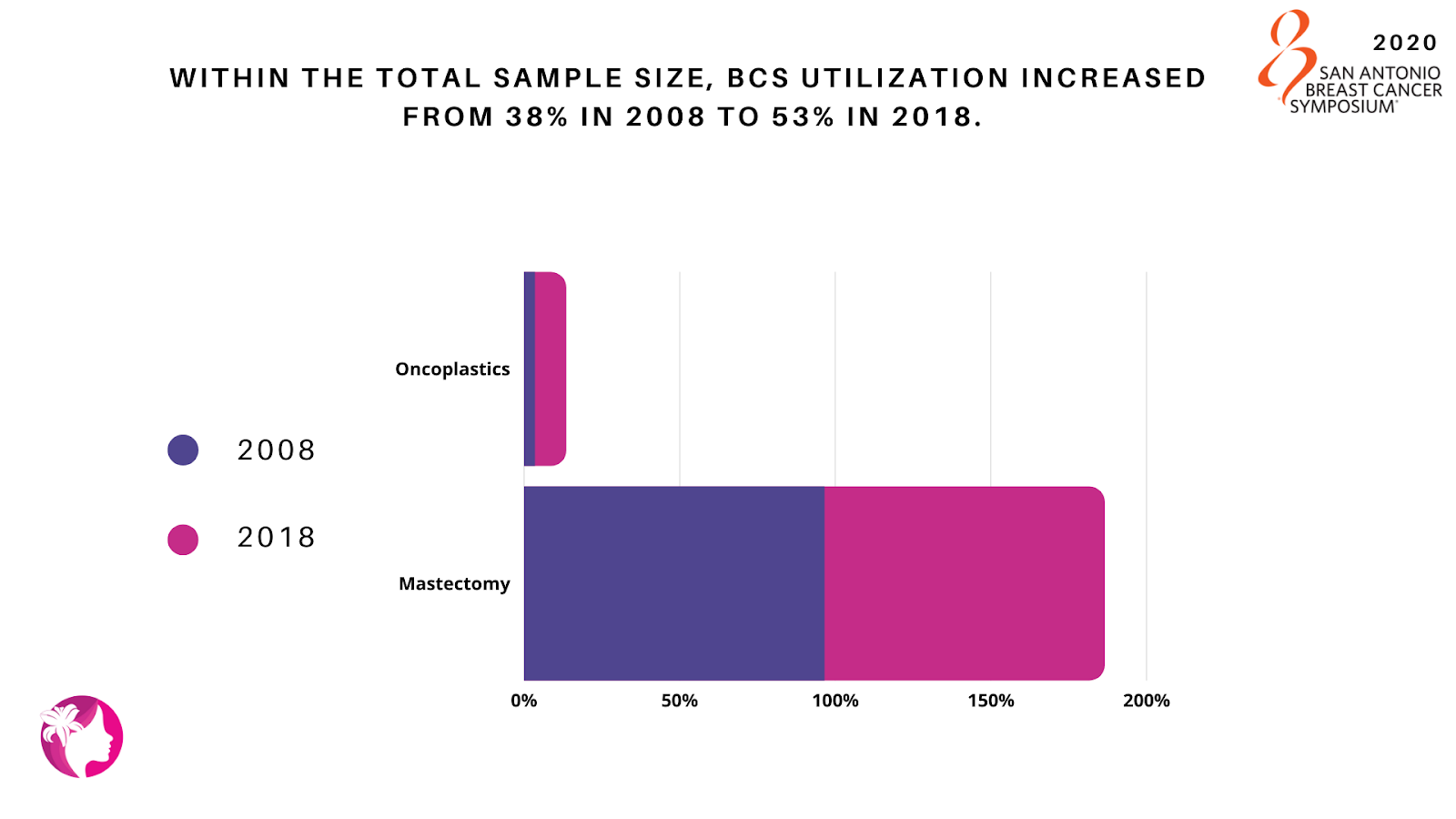 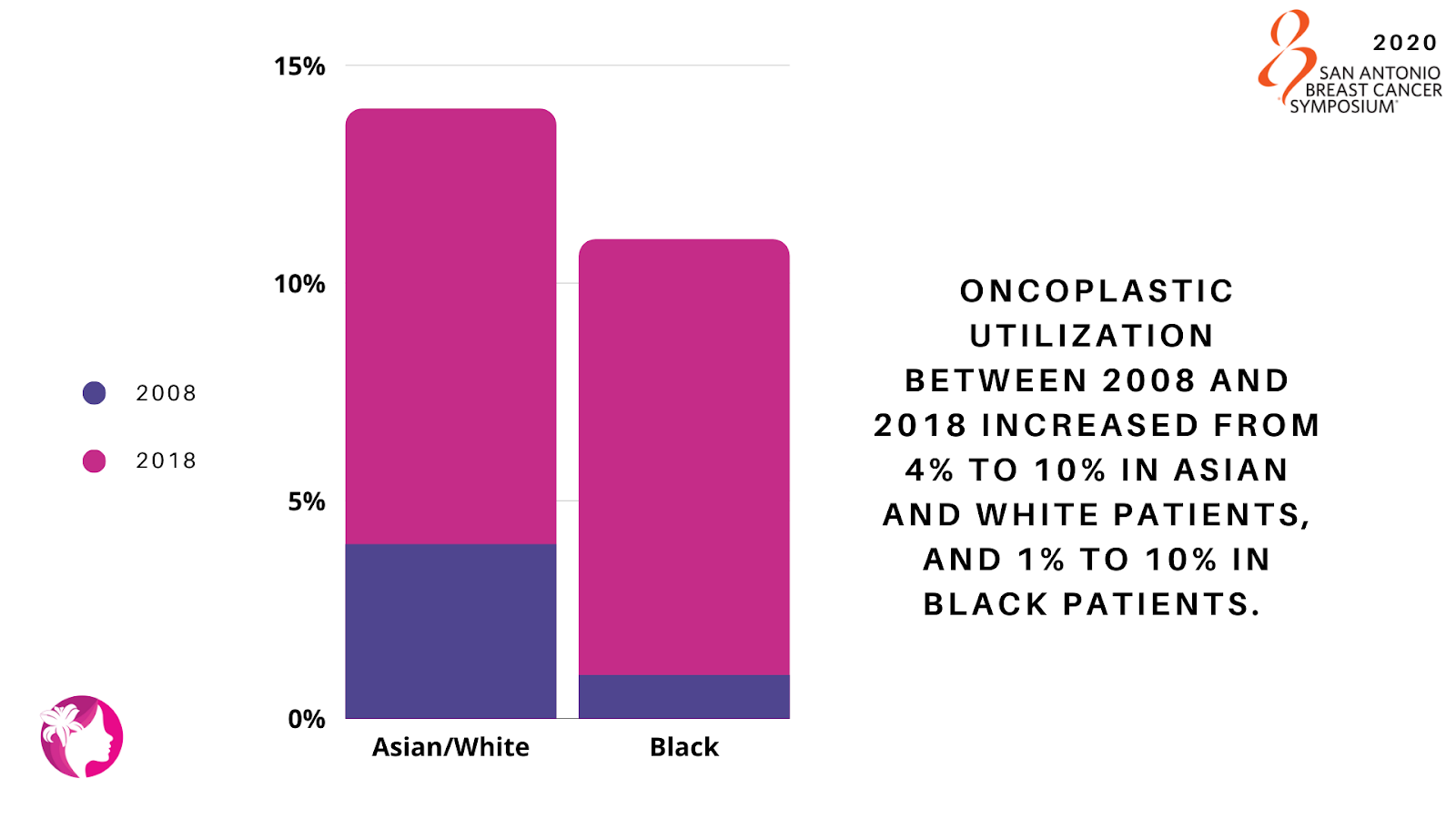 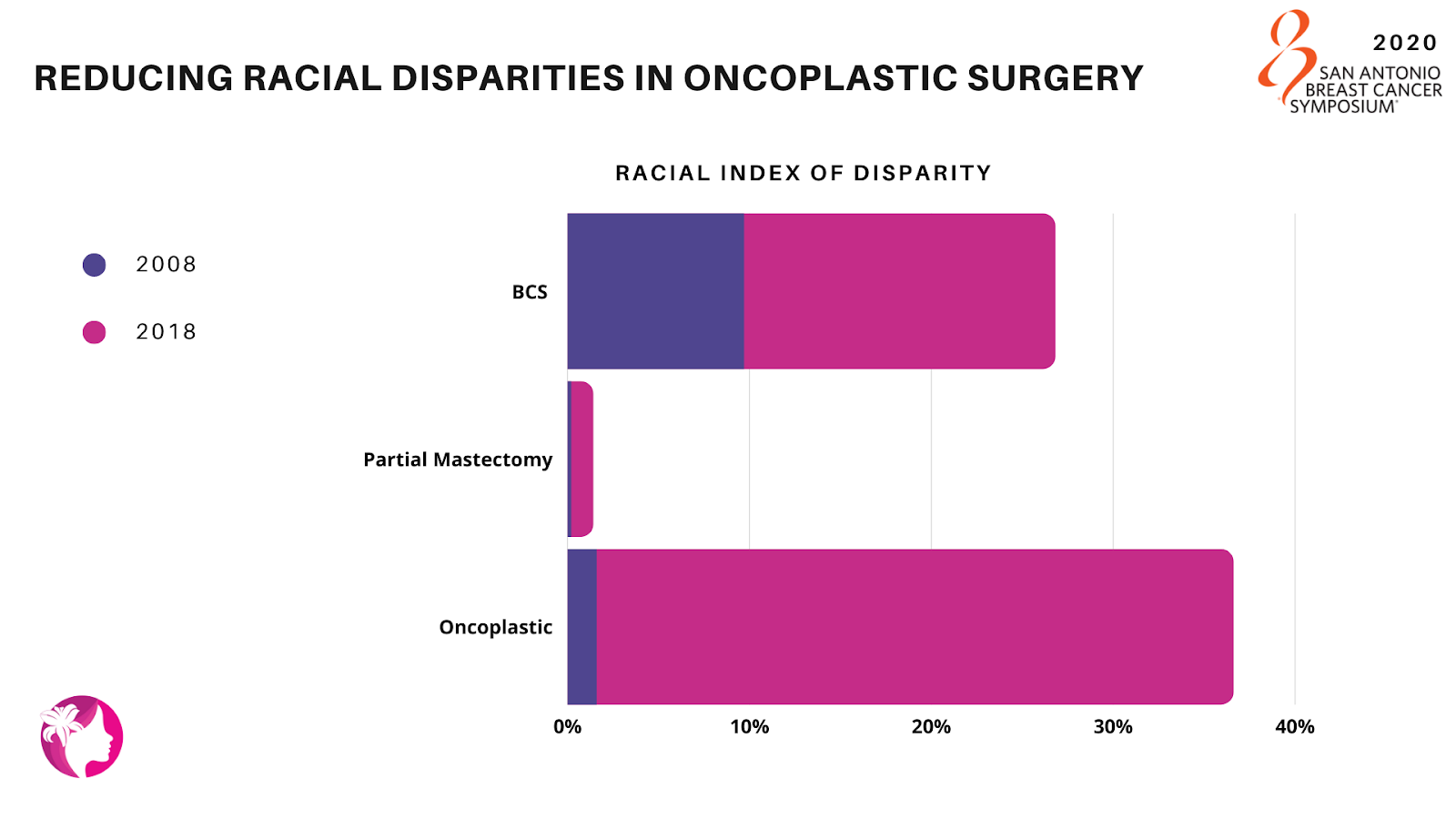 The University of Chicago performed a study on genomic and transcriptomic sequencing of breast tumors comparing 221 AA and 341 EA patients at the molecular level. While the biological drivers behind this disparity remain unknown between ancestral populations, EA TNBC patients in comparison to AA TNBC patients exhibited higher mutation rates in certain tumors such as BRCA2, HR-/HER2+ and FGF3.

The study’s results concluded that there were significant differences in breast tumor heterogeneity and mutation spectrum in TNBC and HR+/HER2- breast cancers between AA and EA patients. Additionally, ancestral differences were also observed in the activity of relevant signaling pathways for TNBC. Overall, the results identify previously unexplored pathways and molecular phenotypes of aggressive disease, providing opportunities for development of more effective biomarker informed treatment of breast cancer in diverse populations.

More comprehensive research and case studies need to be implemented on African-Ancestry (AA) patients. Not having this understanding of how the disease impacts AA patients, it can become more aggressive and causes a higher mortality rate.

The rate of mortality among Black women is 40% higher than among White women. Although, the cause of this staggering difference is still not completely understood, a growing body of evidence leads scientists to take a closer look at the immune microenvironment (the interaction between cancer cells and other cells within and around a tumor)  to find answers.

The authors used the Carolina Breast Cancer Study (CBCS), a large population-based study, and a test they created to identify 48-genes from 13 immune cell types in 1,957 breast cancer patients, including 53% Black and 47% non-Black women. The study identified three breast cancer phenotypes defined by the level of activity of the immune microenvironment which correlated to risk of recurrence, intrinsic subtype, age and race.  Immune response differences may be targetable to improve treatment response, and therefore it is important to identify race- and subtype-specific differences in immune microenvironments as these are the two most notable differences in this study.

Pathological complete response (pCR) is a strong predictor of long-term survival among breast cancer patients who receive chemotherapy before undergoing surgery. pCR occurs when the tissue no longer contains any cancer cells after treatment with chemotherapy then surgery. In a study by the University of Chicago, they looked at 595 stage I-III breast cancer patients. Researchers sought to determine whether racial disparity existed in the rate of pCR. The results of the study showed that significantly fewer Black patients achieved pCR than White patients.

Even after adjusting for tumor subtype and clinical stage, Black patients still had a much lower chance of achieving pCR after neoadjuvant chemotherapy. While the delayed initiation of treatment might have partially contributed to the racial disparity, black women with hormone receptor negative, HER2 positive breast cancer had the largest disparity.

Researchers concluded additional investigation is required as this study was quite small.

Global frequency of triple-negative breast cancer (TNBC) reveals a unique pattern that suggests there may be genetic increased risk specific to TNBC.

In a recent study, West African and African-American women were associated with higher rates of TNBC than East African women and White American women. Even within TNBC cases, outcomes differ between race groups, which may be due to differences in TNBC subtypes/biology, related to genetic ancestry. The study sought to determine the difference in genetic expression and TNBC tumor environments in two distinct ways (race vs. ancestry). The study looked at Ghanaian (West African) and Ethiopian (East African) by analyzing gene expressions. Scientists found hundreds of genes differentially expressed in TNBC tumors between the two groups.

This important ground-breaking study is first of its kind and demonstrates the need for deeper research in African ancestry.

While insurance coverage undoubtedly plays a vital role in ensuring access to preventative services and breast cancer care, it is uncertain how this may affect patient outcomes. When the Affordable Care Act of 2010 rolled out the Medicaid Expansion, a larger percentage of the population gained access to health insurance coverage.

Researchers studied Ohio women (low income, 30–64-year-old, newly diagnosed) with local or regional spread of breast cancer in the post-Medicaid expansion between 2014-2016. This study was to determine whether the Time To initiation of Treatment (TTT) following a breast cancer diagnosis decreased. This research is important since significant delays in TTT can affect quality of life and increase mortality rates.

Using data from the Northeast Ohio Cancer Assessment and Surveillance Engine (NEO-CASE), researchers identified 30–64-year-old women with a new diagnosis of invasive, non-metastatic BC who were uninsured or on Medicaid when diagnosed, excluding women with incomes above 138% of Federal Poverty Level. Though no significant change in TTT was observed, the percentage of uninsured in the low-income group fell by more than half. The percent of women undergoing reconstructive surgery increased from the pre-to the post-Medicaid expansion period, a change not observed in the privately insured control group. Overall, TTT increased by 2 days post-expansion which is statistically insignificant.

Despite the lack of improvements in TTT, the study notes the drop in the percentage of uninsured BC patient’s post-expansion. They also noticed a decrease in the percentage of women diagnosed with regional-stage disease. Lastly, they noticed an increase in BC patients undergoing reconstruction. Taken together, these trends show an overall positive impact of Medicaid expansion on BC process of care and outcome measures.

When patients receive late adjuvant chemotherapy, the harder it is for the body to fight the disease even with medical intervention. There is a greater risk of the cancer spreading. Racial and ethnic minorities, uninsured populations, and low-income patients experience such delays far more often.

A provision in the Affordable Care Act called for expansion of Medicaid eligibility in order to cover more low-income Americans. This study evaluates the impact of Medicaid expansion on racial disparities in time to adjuvant chemotherapy administration. The study looked at 105,385 patients (aged 40-64) diagnosed with primary invasive BC (stage I-III) between 01/01/2007 and 12/31/2016 identified in the National Cancer Database. 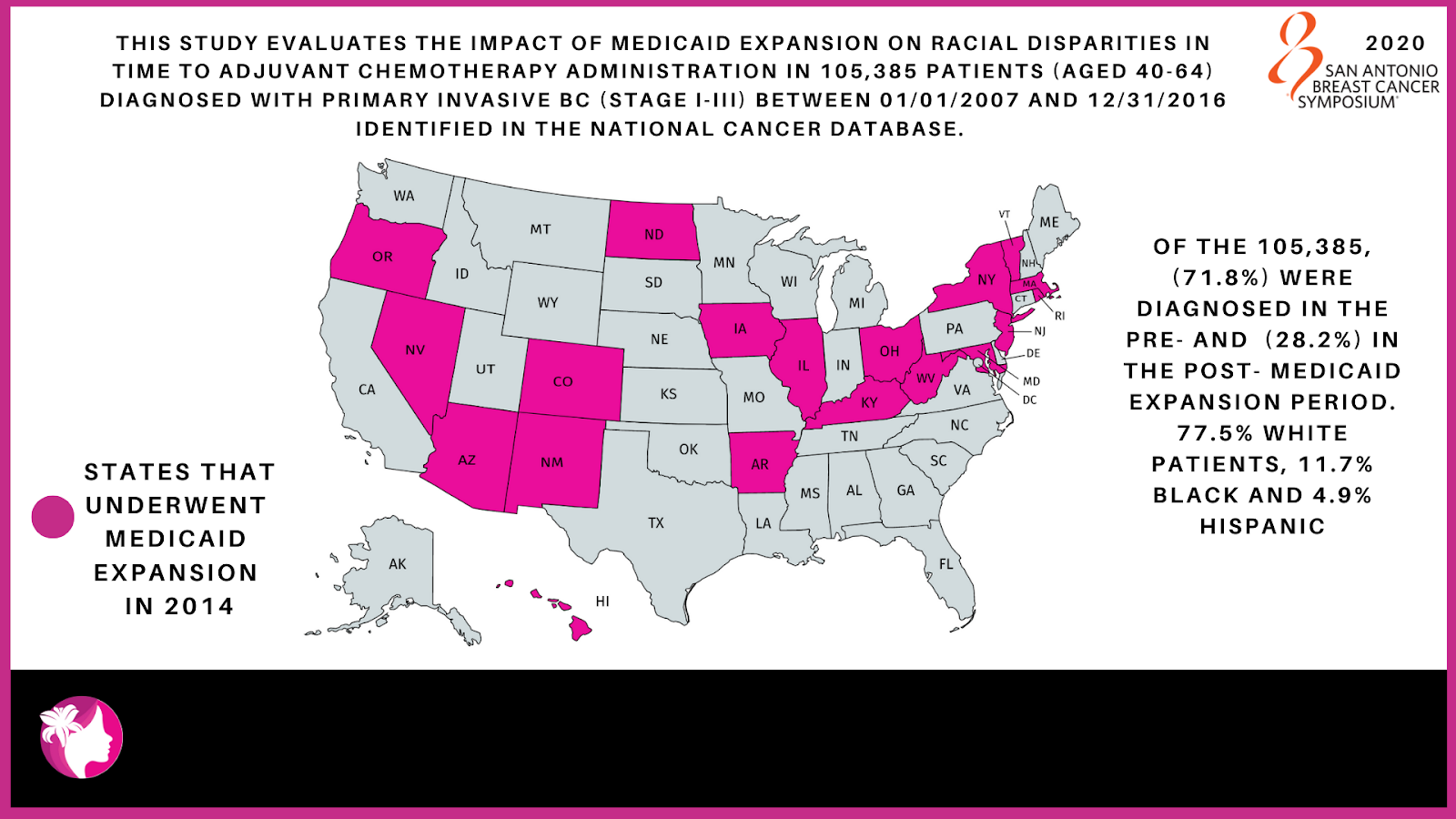 Studies have shown that health services, socio-demographic, clinical, and genomic factors all contribute to breast cancer disparities. The degree to which each factor contributes to health outcomes in cancer is uncertain.

In a retrospective study (a study of past data) used Formalin-Fixed Paraffin-Embedded (FFPE) breast cancer (BC) tissue collected between 1992-2006 within the Iowa and Hawaii (SEER Residual Tissue Repositories). Researchers created the first-in-kind linkage of SEER-Medicare data to physical tumor samples to combine clinical, health services, and genomic data into a single group. This linkage allows genomic analyses with clinical and health services data.

Researchers anticipate that this analysis method may offer new ways to explain links between biology, access, and disparities in breast cancer outcomes.

All poster abstracts referenced in this article can be located on the 2020 SABCS Virtual Symposium Website.

What our ANGELs have to say

“I did enjoy the session. Although there is a long way to go to end disparities, it seems that studies and research are asking questions that will inform steps that can be taken to improve outcomes.”

“Much new evidence and research was presented, as well as new hypotheses and explanations offered for disparities.”

“The “voices” included were largely research studies or from clinicians. The information included was relevant and directly important to patients, but I didn’t feel like the patient voice was necessarily included.”

“I am aware that breast cancer outcomes might be improving, but significant disparities exist in that improvement. I felt this presentation was a hopeful step in getting to the root causes in order to eliminate these disparities. Changes in screening, treatment, access and understanding of tumor biology were all proposed. The field of social stressors, allostatic load, and social epigenetics were raised, but leave room for further investigation and discussion.”